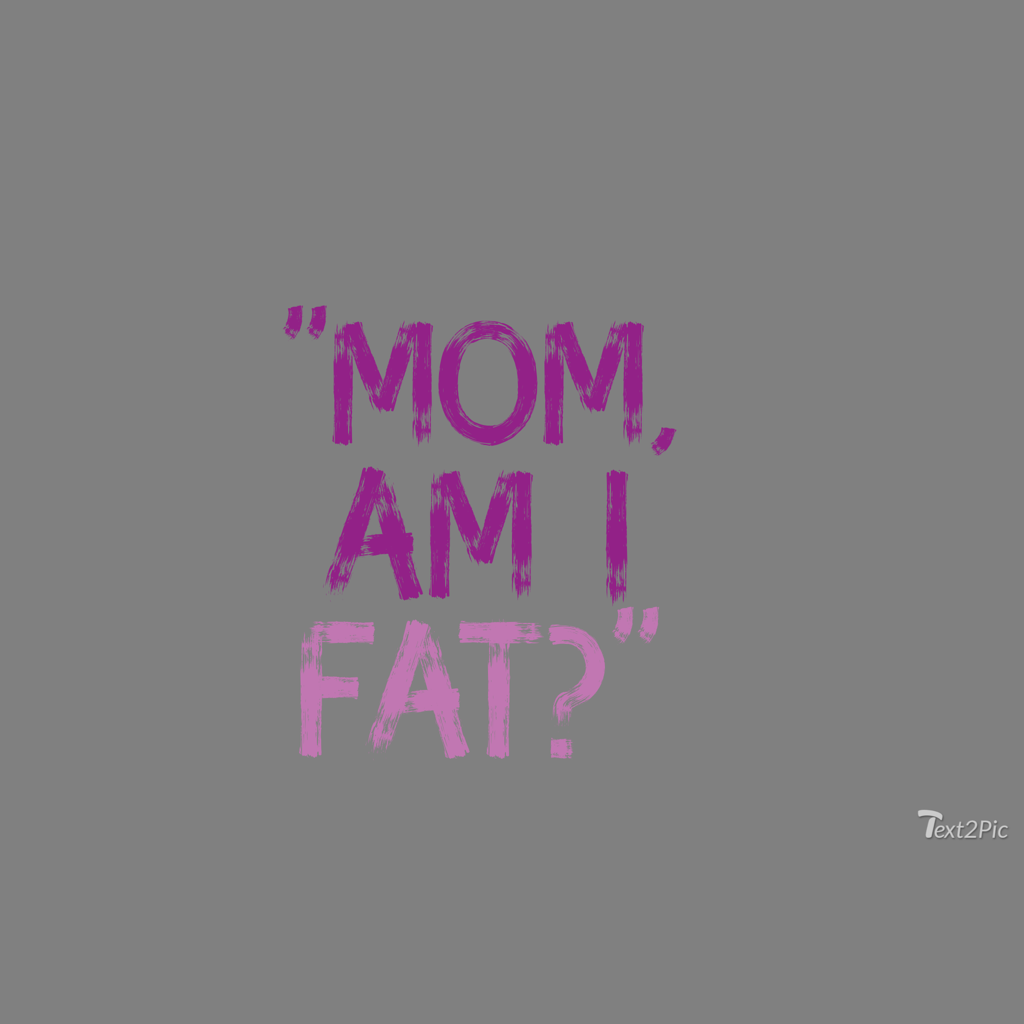 Ahhhh…. First Grade. The kiddos are so young and excited about life. It is a time of newness and huge leaps in learning. Unfortunately for one of my sweet children it was also the year of discovering that being called fat stings. After school one day this child looked up from the kitchen counter where homework and after school snack were happening and asked with great concern “Mom, am I fat?”

“Why would you think you’re fat?” I questioned.

“Because Ava poked me in the belly in class today and said that I’m fat.”

I have to admit that at that moment I wanted to poke this Ava girl right back. As a woman who couldn’t remember a time as a mature adult when I wasn’t concerned about losing weight, I was furious. I have definite memories of wanting to lose weight as a teenager, but as a first grader? I have no memory of body self-consciousness and whether my body was fat, skinny or in between at that young age. I couldn’t believe we were having this conversation.

I actually can’t remember the exact words I said at the counter that afternoon, but over the years since then, my children and I have continued the conversation about bodies; both theirs and mine. I’ve tried to help them be more comfortable in their skin than I was for a majority of my adult life. I’m not sure I’m getting it 100% right, but that’s kind of the nature of this parenting gig, isn’t it?

1. I have tried to make it clear that there are a lot worse things a person can be then fat. It sure doesn’t seem that way in our society sometimes, but it’s true. Mean, rude, dishonest, untrustworthy, lazy… The list goes on and on. Why is fat a go-to slur?
2. I have taught my sons and daughter that no one has the right to an opinion about their bodies other than themselves and their doctor (and for the period of their childhood, their parents). Period. End of story.
3. When I have spoken about my own weight loss I have spoken about it in terms of getting healthier and feeling better. It was obvious I was making huge changes in what I ate and how I exercised and I wanted to frame those changes in the positive way I was experiencing them. I try not to say “I CAN’T eat that,” or “I HAVE to work out.” I want the kids to know that I am making choices and there are some things I choose not to eat ever and some I choose to eat sparingly, but that in the end they are my choices, not something that is being done to me that I’m enduring.
4. I try to focus more on what my body can do then what it looks like. As I was losing the weight I didn’t make a big deal in front of the kids about dropping a clothing size. I did, however, make a big deal about my gains in the gym. First pull-up? Who wants to come watch me do one? Squatted almost twice my body weight for the first time? That was definitely discussed when the kids asked me how my day was. So much emphasis is placed on making our bodies look a certain way, but I think it’s much more empowering to shine a light on what we can do with those bodies, rather than how we can make them look. I think it’s particularly good for my kids to see me work and work to be able to accomplish something physically that I couldn’t do before. I share my victories and struggles with them as they happen day by day. And I encourage them to focus on what their bodies can do and what they can accomplish them.
5. We talk a lot about healthy food choices. I serve healthy meals sprinkled with occasional indulgences. We talk about food as fuel, eating when we’re hungry- not just when we’re bored, and how our food impacts how we feel. I want them to have an awareness of what they put into their bodies, how it impacts their health, and how it makes them feel without thinking about it in terms of food “making them fat.”

My hope for my children is that they won’t spend nearly the amount of time thinking about the number on the scale as I have in my life. There are so many more important and interesting things to think about after all. I hope that they will experience the excitement of stretching the boundaries of what their bodies can do. And I hope that the next time someone else tries to share an opinion about the shape and size of their bodies that they feel confident in ignoring that opinion.

How have you approached discussions of weight/ body image/ your weight loss journey with your children? I’d love to hear about conversations that went well and also times where you weren’t sure what would be useful to say.

How To Write a Training Program (and should you be writing your own programs?)

​0:00:03.3 Kim Schlag: Welcome to episode 96 of the Fitness Simplified podcast. I'm your host, Kim Schlag. On today's episode, I'm gonna talk all about programming your workouts. I get asked a lot, "How do you put together a workout? Can I put together my own workouts? If I do, how do I do that? What do I need to consider?" So we're gonna chat through all of that today. Let's go.[music]

Is My Body Not Responding Because Of Perimenopause?

0:00:03.3 Kim Schlag: Welcome to episode 95 of the Fitness Simplified podcast. I'm your host, Kim Schlag. On today's episode, I'm talking with Midwestern mom, Gina. Now, Gina is getting ready to turn 47, she has had success with weight loss. Actually in the not too distant past, she has had some success, but this time around she is really struggling. And she is wondering if it is because her body is not responding because of perimenopause. So we're gonna break that down for you today. If you listen and you're like, "Ooh, this sounds like me," I want you to check out the brand new course that I have just released.

Get Your Cravings Under Control!