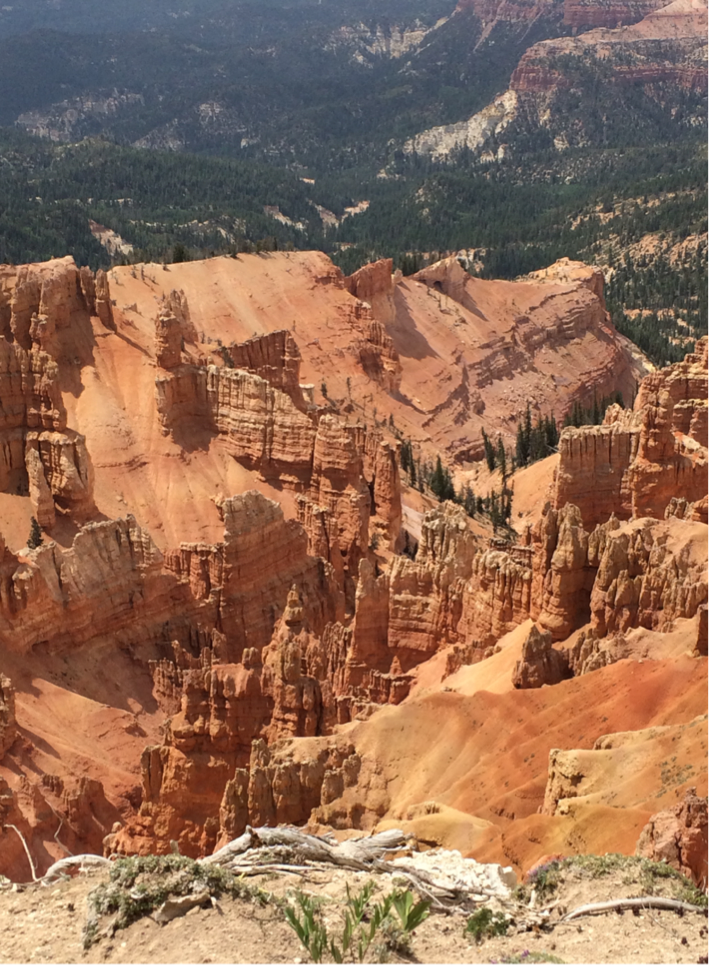 Yesterday my family hiked to Spectra Point in Cedar Breaks National Park, located in breathtakingly beautiful Southern Utah. We are not veteran hikers, and most of our hiking has taken place in the rolling hills of Pennsylvania where we live. The sign at the trailhead warning us to keep hold of our children to prevent them from falling off the cliff edges was my first clue this hike might be a little different. For much of the hike we were just a few feet away from open cliff edges that dropped thousands of feet to the jagged canyon floor below. My heart was racing as we picked our way carefully up and down the winding, sometimes steep, and even slick trail.

At one point towards the end of the hike after a particularly nerve wracking section of the trail my daughter and I rounded a bend and were met by my son who cheerfully greeted us by saying “Guess what? We didn’t die!” It was a much needed tension breaker for me and I burst out laughing. His words continued to rattle around in my head as we finished the hike and started the long car ride to our next destination.

You see, for most of my life I would have described myself as a fearful person. There was a time when I would have certainly turned back as soon as I saw the warning sign at the beginning of the trail, unable to push past my fear even with the promise of amazing, one of a kind views. The fact that I was able to complete this hike, even though I was most definitely afraid, is kind of a personal big deal for me. It’s evidence of an internal change that began with getting my external self in shape.

This is such a great side effect of getting fit. Really when I started my fitness journey I wasn’t interested in internal change. I just was tired of being fat. Plain and simple. But along the way not only did I drop pounds, I dropped a lot of mental baggage. Being paralyzed by fear is one of them. How did this happen? I had to push myself to lose the weight. I had to continuously face some of my fears: What if I look ridiculous? What if I don’t know what I’m doing? What if it doesn’t work? What if I can’t do it? What if I backslide? What if I’m hungry all the time? What if I get injured? What if the people around me don’t support me? I dealt with each of these fears more than once. Let me share with you two strategies I used to push past my fears.

The first one goes back to what my son said to me on the trail… “Guess what? We didn’t die.” When a fear would crop up I would ask myself “What is the worst thing that will happen if my fear is realized?” Unlike on the Cedar Breaks trail, death was never a possibility! What if I did look ridiculous? What’s the worst thing that could happen? Maybe someone would laugh at me, or make a rude comment. What if I lost a bunch of weight and then backslid, what’s the worst thing that could happen? I’d have to start over. I’d feel discouraged. I’d be embarrassed. The worst case scenario was inevitably something I knew I could deal with, even if it was not desirable. And, interestingly, it was almost always better than dealing with how I’d feel doing the alternative, which was giving in to fear and just not trying at all.

While we were towards the beginning of the the trail we could look way out in the distance to the rim on the other side of the canyon. We could see people out on that part of the trail, and I thought to myself, “There’s no way we’ll make it all the way over there.” Less than an hour later we were on the other side looking back at the people just starting. It was a great moment (partly because the look out point was surrounded by a nice tall guard rail and we could enjoy the view without the threat of a long fall to our death).

The part of the trail directly before the look out point had a smallish drop on the left side and a drop of several thousand feet on the right hand side, creating a kind of short bridge. As we watched my husband and son cross in front of us I heard my 10 year old daughter psyching herself up to do the same. “Ok. We can do this. Just one step at a time. Let’s just look at our feet.” She kept up the pep talk as we crossed: “We’re stepping. Another step. Ok. Just a few more steps. Let’s just keep stepping” She and I were so relived to grasp hold of that railing when we got to our destination! Interestingly, that is just how I spoke to myself inside my head (and probably out loud on occasion) as I took on the fears that cropped up on my fitness journey. It was always about the very next step. The next step is really the only one that matters. I was laser focused on whatever that next step was. Looking too far off into the distance was usually overwhelming and involved things I couldn’t do much to impact (other than worry- and as much as I’ve tried to impact situations by the amount of worry I aimed at them, as you’re well aware, I’m sure -worry has no positive impact!)

The trick was the same every day. “What can I do today?” was the winning question. It was a series of small victories: Work out in the “man cave” at the gym alone for the first time- check. Figure out how to do a proper back squat- check. First time ordering just lean protein and veggies with no dessert or dinner roll while out with friends, surviving endless series of comments and questions about my “diet” – check. Regain a few pounds over the Christmas holiday and figure out how to get back on track- check. Just one step step at a time, no matter how small or tentative, is what got me where I wanted to go!

Though a fitness journey doesn’t have a definite end with one particular spectacular moment as a reward, like Spectra Point on my hike, at least for me there were so many moments when the sense of accomplishment in achieving my goals filled me up to bursting! And guess what? I didn’t die!

Get Better Sleep In Menopause
"I don't think I'll ever sleep again!" I sobbed. 3 months of night sweats left me rung out and exhausted in every way possible: mentally, emotionally, and obviously physically. Menopause hormone therapy is first line treatment for night sweats and hot flashes, and for me it was a life saver.
How To Write a Training Program (and should you be writing your own programs?)

Is My Body Not Responding Because Of Perimenopause?