If you’re looking to lose weight, shape your body, get stronger, (or all 3!) you’re in the right spot. I want you to know that it’s never too late to get in the best shape of your life. You’re never too far gone. How do I know this? 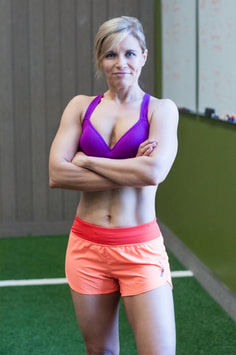 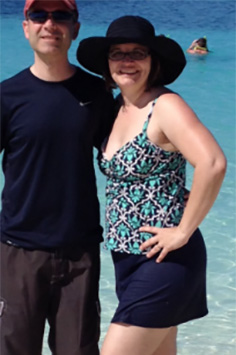 When I was 42 I decided it was time to try (yet again) to lose weight. I’ve been a lot of sizes in my life- from 2 to 16, and every size in between. Over the last few decades I’ve tried, with varying levels of success, to lose fat and look like someone who actually worked out.

I’ve done NutriSystem, Weight Watchers, and MediFast. I’ve tried Zumba and kickboxing and P90X. I even convinced several of my girlfriends to train to walk a marathon in an attempt to lose weight.

​So there I was at 42 having regained a substantial amount of weight yet again. As it happened, we had a family friend staying with us for a few months, and I was his ride to the gym.

He worked out up in the “man-cave” (that’s what the other women and I called the area of our gym where most of the dumbbells, and barbells were.) It was like another world up there. One which I knew nothing about and where I wouldn’t have ventured in a million years.

​I would keep right on walking past the weights to the rows of cardio machines where I would slog through my dreaded, mind-numbingly boring 45 minutes, do a few shoulder presses and bicep curls, then head home.

A few days after we started my friend asked me what I was trying to do.

He then informed me that I was going about this all wrong. Considering that he was more than half my age I was a little taken aback by his frank assessment of my fitness plan.

But he obviously knew a thing or two about fitness, so I heard him out. He told me I had better get off my cardio machines and spend more time lifting weights. And while I was at it I better start eating some protein and vegetables and stop surviving on air all day and then hanging out in the dang snack cupboard all night.

He invited me to train with him and the next day I entered the “man-cave” for the first time. To say I was intimidated would be an understatement. I just tried to do what my training partner told me to and not look like an idiot.

We trained and ate together for the next 3 months. And over those 3 months amazing changes took place. The weight began to drop off- twenty pounds worth to be exact.

Now, I’d lost 20 lbs before (more than once) but this time was different. It looked and felt like way more than twenty pounds. My body radically changed, dropping from a size 12 to a size 2! That’s 5 sizes! I’d never lost 5 sizes before. I had shape and definition in all kinds of places. People didn’t recognize me!

What’s even better is how I felt. I was so proud of myself for the things I was accomplishing. It was thrilling to go into the gym and do something that just the week before I couldn’t do.

I was able to do real push-ups on my toes with my chest to the ground for the first time! I worked and worked until I could finally do my first unassisted chin-up. The weights I lifted were getting bigger and bigger and my body was getting leaner, faster, and stronger.

​The confidence I gained in the gym carried over to other aspects of my life. I felt more comfortable in my body than I ever had before in my life.

I met a long-time personal goal of singing a solo in public for the first time (something I’d previously been too scared to do.) It became easier for me to do hard things outside of the gym because, heck, I did really hard things in the gym every day.

I started helping friends with their training programs. After hearing enough times “You should do this for a living,” I finally decided to take the plunge and get certified as a personal trainer.

​ Since nutrition is a non-negotiable part of any real physique change, I sought out the best education in nutrition coaching as well.

​Learning how to eat and train in my 40’s in a way that made me look & feel better than I had ever looked and felt before changed my life.

Look, I don’t care how many diets you’ve been on or whether you were born when we were all busy doing the Hustle, when Beatlemania swept the world or even when Elvis was king. It is never too late. You can do this. You can stop yo-yo dieting. You can look better, feel better and be stronger and more confident than you’ve ever been. Let’s do this!